While EasyMorph has a rather comprehensive toolkit of actions and functions there can be cases when it's not enough. In such cases, PowerShell scripting may come to rescue with its vast power of the .NET framework ecosystem. PowerShell is built into EasyMorph in a way that allows passing data from EasyMorph to an embedded PowerShell script, and from the script back to EasyMorph.

This article assumes that the reader has at least basic knowledge of PowerShell syntax and cmdlets.

PowerShell scripts are nested in EasyMorph projects within the "PowerShell" action.

Output of a PowerShell script can be captured back into EasyMorph. However, it works differently than in the "Run Program" action where the console output is captured. In the "PowerShell" action, capturing means importing the output sequence of the PowerShell command pipeline, not the host console output. This means that each object in the output sequence must be converted either to text, or number prior to capturing in EasyMorph.

In the example below a PowerShell command is used to obtain a list of running Windows services, and import it into EasyMorph. 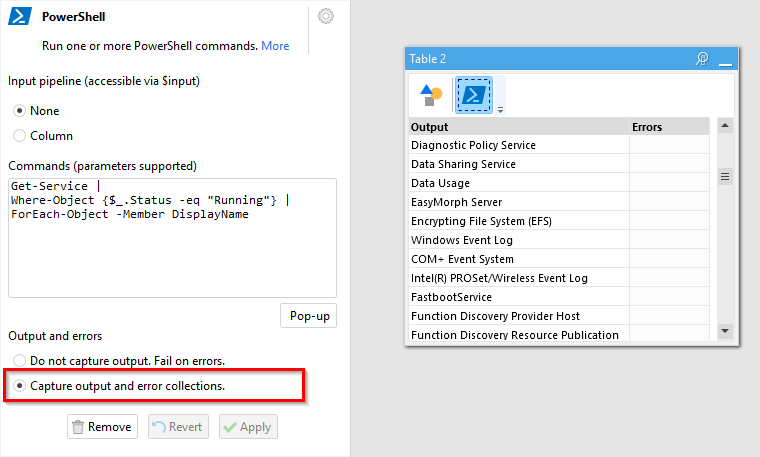 Notice that the output sequence of Get-Service is a sequence of .NET objects. Therefore ForEach-Object is used to extract the name of each object and create a sequence of text values which becomes the script's output.

The error collection is captured as separate column, and can be used for diagnostics or arranging a failover logic

In the example below a sequence from 1 to 10 is generated in EasyMorph, then sorted in reverse order using a PowerShell command, and captured back into EasyMorph. 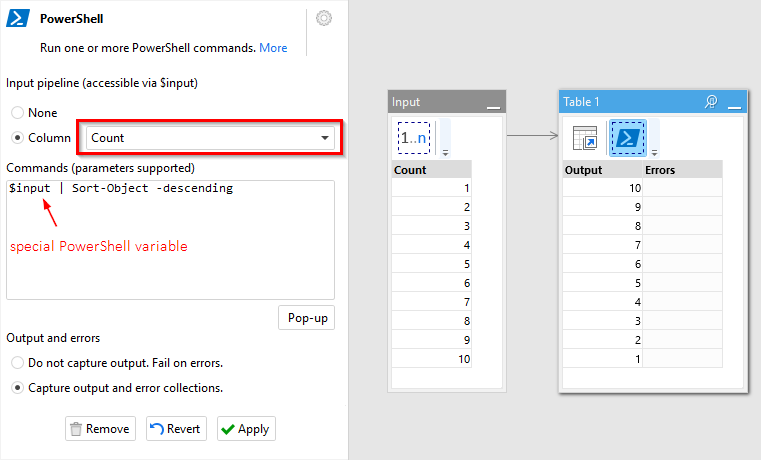 Just like in the "Run Program" action, in "Powershell" it's possible to insert project parameters in curly braces right into the script text.

For instance, in the example below the command copies a file, which is specified by project parameter {Source file}, into folder C:\test. Double quotes added just in case the file path contains spaces. 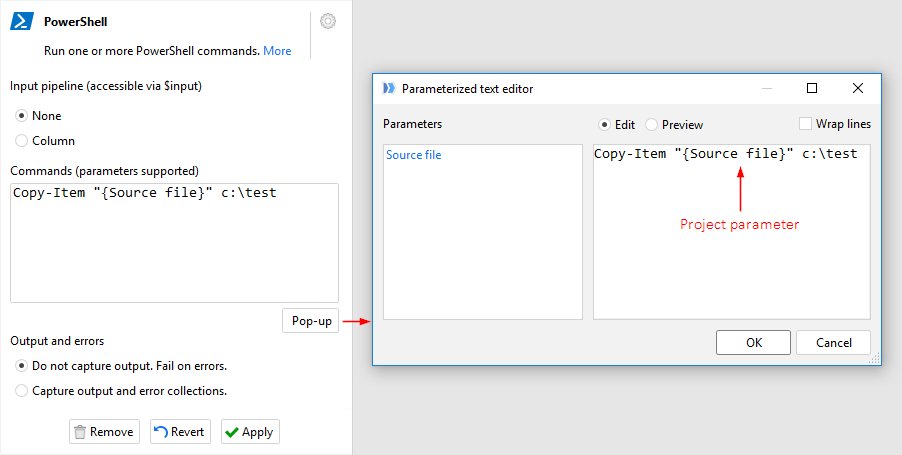 Note that parameter values are inserted only when the text between curly braces is an existing parameter name. If no parameter with such name then the curly braces and text remain as they are and no error generated. This is convenient because PowerShell commands frequently use curly braces for various expressions, therefore you can mix EasyMorph project parameters with PowerShell expressions.


Read next: Sending and receiving emails