This article and all the following articles on collaborative use of EasyMorph assume presence of EasyMorph Server in your organization.

The Server Link is a mechanism that makes EasyMorph Desktop "aware" of EasyMorph Server. When configured, the Server Link automatically connects your Desktop with the Server. This connection allows Desktop users to collaborate with the help of the Server:

A configured Server Link is mandatory for such collaboration. Therefore, let's start with configuring the Server Link.

The Server Link can be configured from the Start screen of EasyMorph Desktop. It requires specifying the Server host (the Server computer name) and at least 1 Server space (typically your team or department should have a designated Server space). If you're not sure about the Server host and space name, consult with your nearest Server administrator. While multiple Server spaces can be configured in the Server Link, it connects to only one space at a time, which becomes the current space. Switching spaces can be done from the Start screen as well. 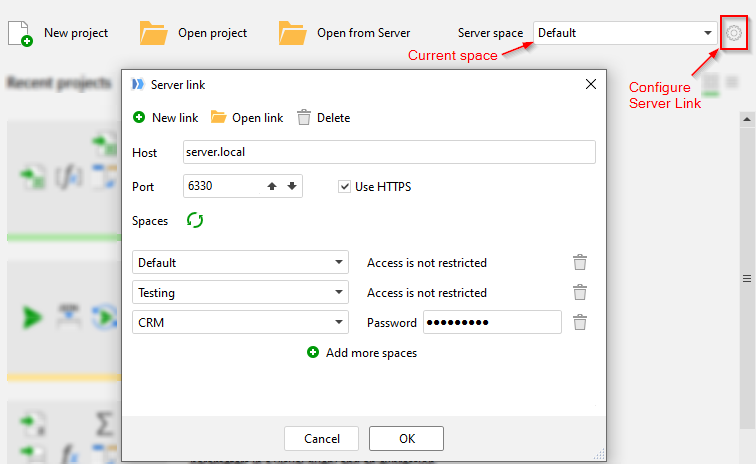 Tip: There can be multiple Server connections configured in the Server Link. This allows quick switching between, for instance, production and development Servers.

Leasing a license from Server

Once you have configured the Server Link, you can automatically obtain a user license from the Server. See this article for more details: "How to lease a license from EasyMorph Server".

Hint: When a project with actions that use Server Link is executed on EasyMoprh Server it uses the connector repository of the Server space in which the project is executed.

Opening a project from Server can be done from the Start screen. After the Server Link is configured, the "Open from Server" button appears next to the regular "Open project" button (can be seen in the uppermost screenshot on this page). When a project is opened from Server, a local copy is saved first and then is opened in EasyMorph. When editing the project, it's the local copy that becomes edited. Saving an edited project doesn't upload it automatically back to Server. To publish the edited project to Server, publish its local copy by pressing the "Publish to Server" button as described above.

The result of any action can be sent (published) to Server as an EasyMorph dataset in two clicks. It makes it easy to share data between EasyMorph users. To send the result of an action to Server, right-click the action and choose "Send to Server". 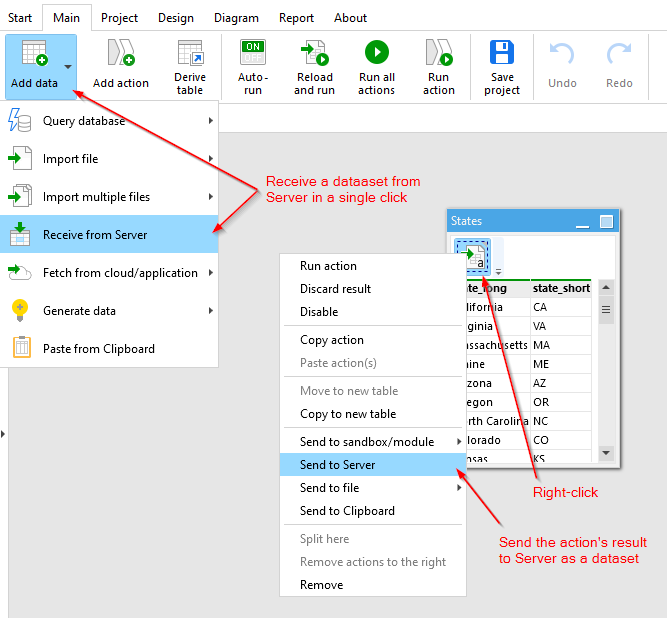 To receive a dataset from Server, press the "Add data" button and choose "Receive from Server". The "Import dataset" action will be created automatically and the selected dataset will be immediately fetched from Server.

Both the "Import dataset" and "Export dataset" actions support Server Link as a source/destination. It makes it possible to securely store datasets on EasyMorph Server (as an alternative to storing data in a database) and fetch them on the fly, when a project is opened. This technique is called "hot-linking datasets". It also makes it easy to share a project with another person. The project will be automatically populated with data as soon as the recepient opens it. To read more on hot-linking datasets see this Community forum article: "Server Link explained"