Calling other modules (or projects)

This chapter requires understanding of parameters and groups explained earlier in this tutorial.

An EasyMorph project always has at least 1 module, and may consist of several modules. A project module is basically what you see when you are designing a workflow. It consists of one or more groups (tabs) that contain tables and charts, and each table, in turn, contains one or more actions. Each module has its own set of parameters. Data connectors in a project are the same for all modules in the project and can be used in any module.

Such a nested structure allows managing workflow complexity gradually. Simple workflows may have only a few tables in a couple of groups in one module. Complex workflows may comprise multipe modules and groups, tens of tables, and hundreds (even thousands) of actions. 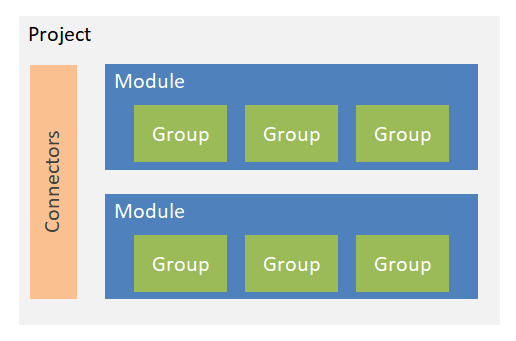 When a new project is created, it has by default one module that is called "Main". Additional modules can be created in the right sidebar, or in menu "Design" of the ribbon toolbar. To select another module, click its name in the right sidebar. You can also press Ctrl+PgUp and Ctrl+PgDn to switch between modules. 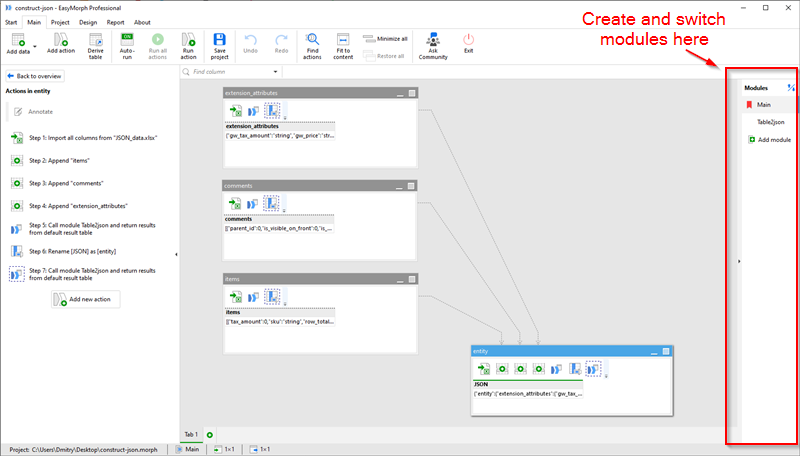 So far in this tutorial we used only one module. However, in EasyMorph one module can call (run) another module, which is similar to calling subroutines in programming languages. It might be convenient in a number of cases: 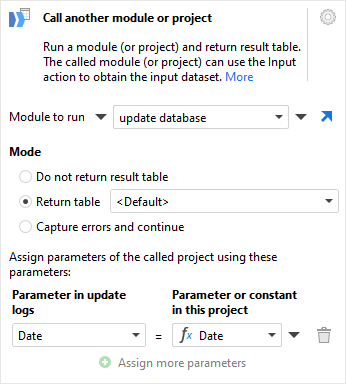 Returning a dataset from a called module

The Call action can run in one of the two modes:

It is possible to not just return datasets from called modules, but also pass datasets to called modules with the help of the "Input" action. This action should be inserted in a called module as a starting point of workflow. When inserted, the action initially returns nothing (i.e. empty dataset). But when the module is called from another module, the "Input" action automatically produces the input dataset of the "Call" action of the calling (parent) module. Since datasets are passed between modules in memory without copying or reading from disk, it may significantly improve performance in some scenarios.

With the help of the "Input" action it is possible to arrange two more ways of calling a module: 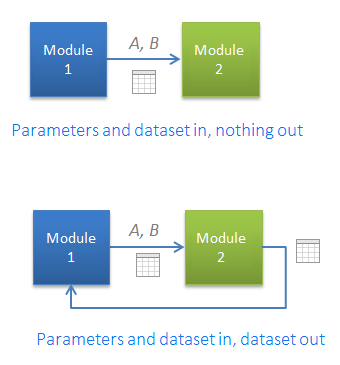 When just created, the "Input" action returns no data (it's also true when project is just opened). Therefore, in order to design transformations of data that comes through the "Input" action, the action has to be manually populated with some sample data. The easiest way to manually populate sample data into the "Input" action is to press the "Populate automatically" button in the action properties (see screenshot below). When the button is pressed, EasyMorph scans the project, finds a "Call" or "Iterate" action that calls the module, and copies its input dataset into the "Input" action. It is also possible to copy a result dataset of an action and paste it into an Input action (similarly to Sandboxes), or read it from a dataset file. 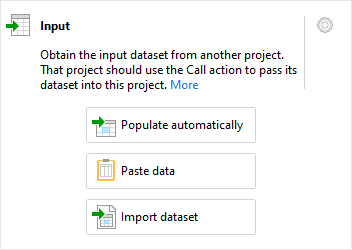 The Call action can also call another project (subproject) in a similar fashion as it can call a module in the same project. As with modules, input parameters and an input dataset can be assigned to the called project, and a result dataset can be received back from it. When another project is called, it starts execution from the default module (marked with red flag). The ability to encapsulate a calculation logic into a subproject enables creating reusable projects that can be used by multiple projects/users. Such reusable projects can be convenient in various scenarios. For instance: