With EasyMorph you can perform common file operations in a fast, visual way using the "File command" action. As with other actions, this action's commands can be configured using parameters. As of now the following commands are available:


Notice that some commands deal with one file (or folder) while some operate with multiple files using lists of files. Let's take a close look at the difference between them.

When a command operates with one file or folder the file name(s) can be specified either explicitly or using a parameter. In the screenshot below the "Copy/move file" command is configured using a file name explicitly (MyData.xlsx), and a folder path using a parameter (Target folder). 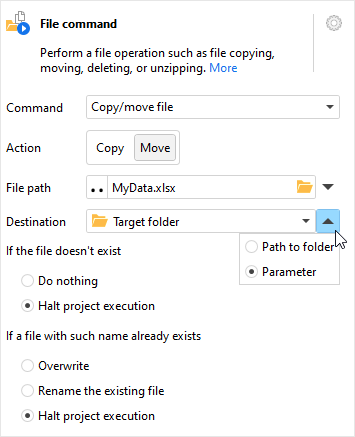 Some of the commands above operate with a list of files. A list of files in this case is a column which values are full file paths. It's a convenient way to manipulate multiple files at once without using iterations.

Once a required list of files is produced, use the necessary file command and specify the column that contains the list of files in the action's input dataset. 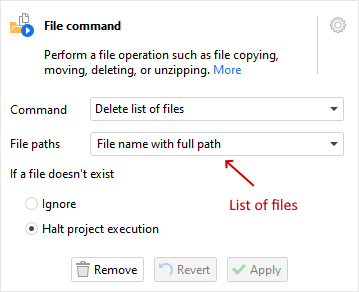 Watch a video on file and folder operations in EasyMorph:


Example: a project that deletes all .PDF files from the user's desktop: clean-desktop.morph.